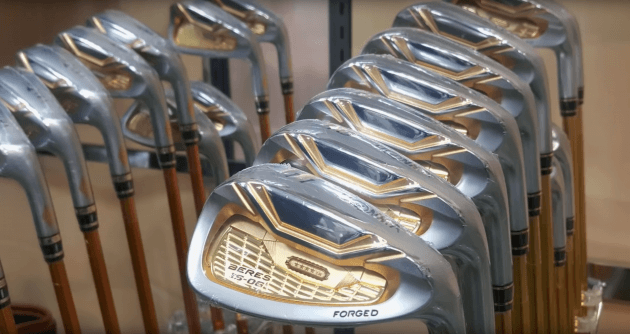 Golf doesn’t have to necessarily be the most expensive game in the world to play, but a new player is expected to sink some capital when they first start participating. If they can’t afford a new set when they begin, it’s usually possible to hire a set from the golf club itself, although the prices can vary widely depending on the location and the overall exclusivity of the course itself.

For players that have plenty of capital to sink into the game and want the very best, there are a few sets that are so expensive that they can sometimes cost more than a brand-new house. These are sets that are made of the very best materials can buy and are generally used only by some of the world’s best players. These are some of the world’s most expensive golfing sets of all time.

Bentley decided to splash out for their 100th anniversary by creating a set of centenary clubs that would go along with a number of other products. The set in question is extremely unique, and not only does it look great, but it was designed by the company to work as well as possible on the course.

In total, a player can expect to pay over $15000 for a centenary Bentley set, a princely sum when compared to most standard sets found at the local sporting store.

This is a German club that has a coating of 24 carat gold that’s set around the shaft. The cherry wood also has a number of diamonds fixed to it, although it’s possible to get a golf of a version that doesn’t have the diamonds.

The more expensive putter comes in at around $150,000 in total, and while it’s certainly out of the budget of most players, it’s more of a show piece than anything else, and would most likely not last too long on the course with real play, especially considering how weak gold is.

Next, we have a long-nosed putter that was designed and fabricated by Andrew Dickson. For a long time it was owned and used by Jeff B. Ellis, known in the industry for collecting vintage golf sets. It’s one of the highest grossing auction pieces in the world, having been sold in 2007 at an auction for an amount of $181,000, making it the most expensive single club ever sold.

Andrew Dickson is one of the industry’s oldest sellers of golf equipment, which is part of why the asking price was so high, the kind of money only seen through election betting.

Another vintage set that was sold at a Sotheby’s auction, and was made by the world-famous Spalding company, who are known for creating extremely high-quality sports gear.

The Palmer Patent Fork Shaft is a true antique and there’s no other set like it in the world, which is part of the reason that it would eventually be sold at the auction for a whopping $490,000, making it the most expensive set of all time.