Golf balls are one of the most recognisable pieces of sporting gear in the world. Thanks to its small shape, white colour, and dimpled surface, the golf ball is fairly unique in the sporting industry, and it’s become the standard for the game across the world.

The golf ball has undergone a number of transformations since it was first invented, and today’s iterations are designed to be as durable and aerodynamic as possible, allowing a single ball to be used an almost endless amount of times. Here we will look at how golf balls are made and why they can take so much punishment on the course.

What Golf Balls Consist Of

When golf was first made popular, the balls at the time were made out of a type of rubber. This proved to be a tough material that allows them to be used for a long time, and rubber is still very much used to this day, although much of the ball has since been replaced by a special kind of plastic.

The bands of the inner ball are made of a special core that’s made with moulded rubber, and more layers – known as mantles – can be made of both rubber and plastic, depending on the manufacturer. DuPont Company, made some changes when they invented a type of cover known as Surlyn, which is crafted from a synthetic compound that make them almost indestructible to golf clubs.

Some of the more expensive balls are created from urethane, which is a softer material that’s great for absorbing the blows of golf clubs without creating any long-term damage. And while these balls tend to be more durable, they also give the ball better spin, allowing for more control over how far the shot goes, as well as finer tuning of the overall direction.

Manufacturers will often interchange these various materials to create the balls that we make use of today. It ultimately depends on what the golfer is looking for and how much they are willing to pay for a set, or if they would use the money to buy Bitcoin right now. 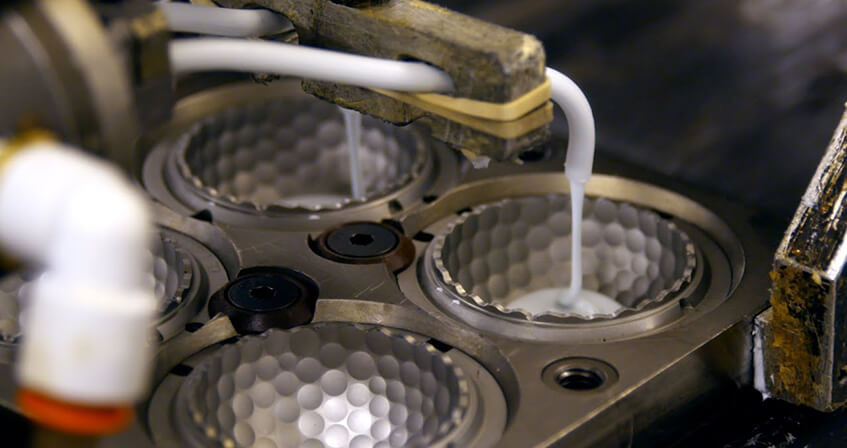 While rubber is still very much used when creating golf balls, they historically made use of wound rubber bands that they would wind around a core multiple times until they got the shape and size that they wanted. Modern balls are vastly different to this as the use of plastic has become more popular.

A ball today would most likely be made with a solid plastic core, where liquid plastic is set in a mould and allowed to cool to form a thick and durable cover.

The cover is then adding a dimple pattern to the entirety of the cover of the ball. These dimples give the ball increased aerodynamic qualities, allowing it to fly much further.

Without the dimples, the ball would have a far shorter range and be virtually useless on courses of any decent size. There are usually a number of layers beneath this cover, depending on the process in which its made. The layers give the ball extra durability, preventing them from cracking or shattering when hit with a particularly hard blow.